skip to main | skip to sidebar

Not blogging has not been intentional just inevitable. Farmville exists and so does Yoville and Cafe World. I am an avatar. . there is no reality or surreality it is all virtuality. I have virtually come to a creative stop and its not even full. Graduation is the death toll for the artist.

However accidentally, I have experienced a few interesting works. Shattered by Claudia Clare at Hornsey Library was a provocative collection of vessels depicting a few choice comments and motifs relating to women in various states of oppression and expression. Princess Hymen, Aftermath, Cherry Blossom, Green Lanes Traffick and Dancing. Alongside Shattered was How to Eat a Pomegranate, vessels and video intended for exhibit on in Iran but never came to be. Virgin wives and much male hypocrisy, lots of dripping juice and metaphor, everybody wanted to talk about sex and violence and arranged marriage. I am reassured that making art and displaying it in galleries is actually worthwhile. People REALLY are influenced and effected by art and its references.

Ceramics at Harrow seems more energised now that the decisions have been made and the future is not hanging in the balance. As sad as it has been to imagine the department closing at least those left on the course know what is going on and can take full advantage of the fantastic facility. A strange atmosphere last year was very distracting and unfortunate for all concerned. Steve Buck is running a great and still super vibrant applied art course much to the approval of the students.

Next door in the Mixed Media Fine Art studio, the second years had thier interim show with all kinds of wierd and wonderful stuff. Films of speaking vaginas, Virgin Mary vibrators and some elasticated walls all tested the imagination. Will Bache has an understated and stylised interpretation of the 'portrait' and the 'frame'. An artist's workshop vibe wth just a touch of decay and nostalgia, yet current and street. Work that is serously calculated and contrived yet looked entirely organic and spontaneous. Clever stuff indeed and i doubt he's even aware of it.
Posted by Geraldine Williams at 18:15 No comments:

I am confused and incredibly angry at the contradictions within the ceramics world. The V&A opened phase one of their new ceramics gallery at the weekend with a flurry of events including an open air firing- with proper wood and everything. The new galleries superbly furnished with current works alongside the ancient. But on Sunday night my Heaven turned to Hell with the news that Camberwell is Closing. I have lost the will to pot altogether. Somebody please explain it to me.

Posted by Geraldine Williams at 19:54 No comments:

not much to do with ceramics

It's owl season so not much ceramics going down as they might say in 'The Wire'
Posted by Geraldine Williams at 18:38 No comments:

hello its been a very busy few days turning 44 and opening at New Designers. I am pleased to be at the Design Centre Islington but many of us wondered how our work fits into the 'design ' genre.

I don't think it really matters as the exposure of the show exceeds that dilemma. The Bombay Sapphire was a bit weak and mixed with a juice that brought me out in a rather uncomfortable ankle rash.
Posted by Geraldine Williams at 13:26 No comments: 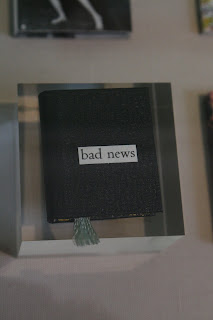 What a strange day. From Samuel Johnson to St. Paul to Farrah Fawcett to Micheal Jackson via Tate Modern and Strada Camden. it's all a bit much ain't it? oh at least the Jeff Goldblum rumours arn't true, some consolation in this bath of fact fantasy and fatality.

The House of Words was wonderful. Chris Kenney's little books a delight and intrigue. I sooo love little books and often make them about big things that happen. If only i could have opened his little black book of 'Bad News' perhaps it would have some forsight into the sad death of Wacko Jacko. He rocked my world since I can remember. It's hard to understand how my own life has been catalogued in terms of Micheal Jackson songs. ABC when i was learning to read. Billy Jean when i ws trying to avoid unwanted pregnancy. Thriller when i was looking a bit like a zombie from the excessive partying. Leave Me Alone when i was getting divorced. Bad when i was getting over it. Earth Song when i had my last baby Sheelagh. Smooth Criminal when i got arrested and You Rock My World when i met the love of my life. Jamon mutherfuka.

Dinner with my girls was nice we talked about dead dads and uncommunicative brothers. C'est la vie.
Posted by Geraldine Williams at 12:43 No comments:

Visiting The House of Words today with Sheelagh, recently finished her GCSE's. Looking forward to this unusual collection of installations and interventions - whatever they are - curated by Tessa Peters my proffessional practice tutor from uni. We will walk from Holborn to Gough Square hoping to get into the atmosphere of 18th century London- not likely i know- but it might be fun. www.drjohnsonshouse.org
Posted by Geraldine Williams at 08:45 No comments: 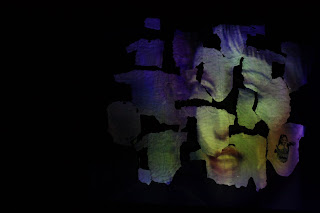 Thank you to Claudia Clare for writng such an observant and inspirational blog on her site the ' C' word. I am delighted to be mentioned and linked to the site. having only recently developed a conciousness about womens' issues relating to images in popular culture and consumerism i am relieved that i was able to communicate something of these concerns in the narrative of the work which i felt was possibly a little self indulgent. oh well it wasn't such a bad gamble perhaps.
Posted by Geraldine Williams at 12:14 No comments:

Just been to Camberwell to see the fantastic show of Ceramics from this years graduating students. It was great, diverse demanding and altogether a unique and enjoyable experience.
I have a special interest in this years group because i started my degree at Camberwell with them and left them all behind to try my luck at Harrow. although i don't regret my choice, i do miss the friends i made and was delighted to see them and their work.

Rebecca Cowie's fragile and complex gatherings of bird like bone and shell were unusual and intriguing. She told me they wern't really 'her' but i disagree, rarely have i seen work that so acutely is identifiable with a person's character. I was also impressed with Jessica Joslin's plates- all wrapped up for presents and what a great gift they would make.

it was fab to see everyone and even better to see the accomplished works. I look forward to New Designers and partying with the crew past and present.
Posted by Geraldine Williams at 17:53 4 comments:

Welcome to my Blog.

I would like to thank everyone who came to Harrow Ceramics Degree Show 2009. It was an exciting and challenging event in many ways. Notwithstanding tube strikes, torrential rain and an ill fitting peepshow lid, I loved showing off my new experimental works.

I would especially like to mention that this degree show work was dedicated to Lynda and Sunday Jones.
Posted by Geraldine Williams at 04:27 No comments: